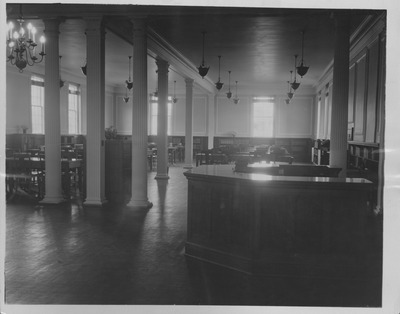 Undated photograph, circa 1930's, of the interior of Ina Dillard Russell Library taken by an unknown photographer. This is an image of the interior of the oldest section of the library. This portion of the building was constructed in 1932. The original building was named Ina Dillard Russell Library in honor of Senator Richard Russell's mother. The upper stories still house library administrative offices and study rooms. This building was expanded in 1968 and again, to its current state, in 2007.