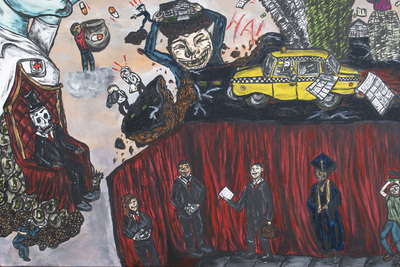 For this image, we are taking a closer look at the bottom left hand corner which features an array of issues. While some are previously mentioned, two new issues arise. The crumbling infrastructure is inspired by the crumbling infostructure in Ambrogio Lorenzetti’s Allegory of Bad Government. This is a sign of an ineffective government, in this case, one that has been corrupted by late capitalism and it’s players. On the falling road we see two salesman staring directly at the blue collar worker on the lower corner. Though they see him struggling, all they care about is how they can best advertise to him, which is why they take note of the plus sign on his arm. As we see the blue collared worker struggling hard to serve this big skeleton figure, we see he is surrounded by money he worked for but sees none of- as it all goes to the skeleton. The skeleton is a representation of corporate greed that many CEOs possess in their character.

This painting highlights the shortcomings of Late Capitalism by showing how big systems affect us all through major topics including Big Pharma, Lean-staffing, Housing Crisis', Corrupt corporations and more. The piece also displays the idea of our worth today being largely based off how much we can produce and the issues that come with that way of thinking.