The Seven Virtues of Humanity: Fidelity 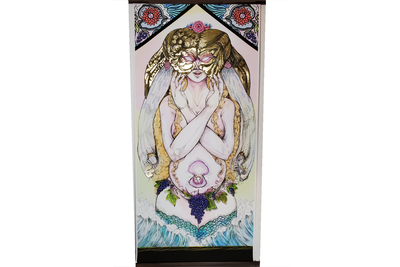 Fidelity, the opposite of Lust, tells a story in which two lovers share a bond as solid as gold, to which their bond transforms into the creation of new life- the ultimate symbol of two people coming together as one. The piece is full of fertility symbols such as rabbit ears, fruit, and the sea- the origin of life itself. Chrysanthemums, Diascia, and Scilla all adorn the figure’s head, flowers that symbolize loyalty- a key trait that lies within such love.